War in Ukraine Has Argentina Reverting to Protectionist Playbook 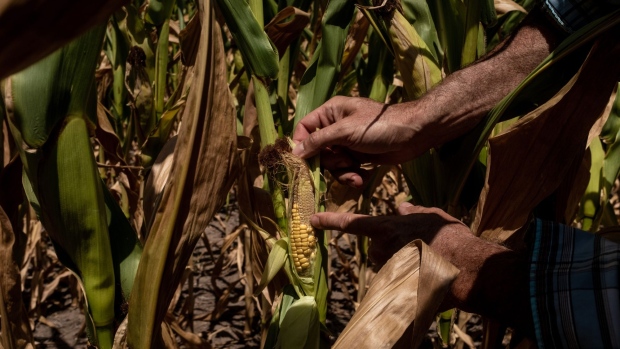 Stunted corn growth due to drought during a heat wave in Zarate, Buenos Aires province, Argentina, on Tuesday, Jan. 11, 2022. Argentina’s key agriculture areas saw intense and prolonged heat, coupled with little or no rain, through Jan. 12.

The ruling coalition that took office in 2019 is packed with officials who support intervention in crop and beef markets to secure supplies and suppress prices for Argentines, 41% of whom live below the poverty line.

Angry farmers and a more market-orientated wing of the administration had largely kept interventions in check. But since the war in the top crop-producing Black Sea region upended global markets, protectionist policymakers in Argentina have come out swinging.

“This administration has constantly grappled between being something new and more rational versus being a continuity of the populist 2003-2015 period,” said Lucas Romero, director of political research firm Synopsis Consultores in Buenos Aires. “But it needs results on the inflationary front to survive, and it now has the war as justification to go and be protectionist.”

Argentina is a top beef exporter, but having cheap ribs to barbecue at home is also considered a birthright by carnivorous locals, making that market particularly susceptible to government interventions.

Rising global feed costs is one obstacle to keeping beef prices in check, but the South American nation has another problem: A recent drought on the Pampas farm belt -- later compounded by wildfires to the north -- is threatening to reduce its cattle herd and, in turn, supplies to slaughterhouses.

“I’m taking this decision because of the war that’s pushed global food prices higher, which comes on the back of a crisis for our own ranching industry,” Agriculture Minister Julian Dominguez said this week on Twitter of the threat to ban exports.

To be sure, other governments are also trying to shield voters from the full force of global inflation. In neighboring Brazil, President Jair Bolsonaro has been fighting against fuel price hikes. And in Europe, Serbia banned crop exports.

“This isn’t an issue that’s unique to Argentina,” said Sergio Berensztein, who runs a political consultancy in Buenos Aires. “It’s more generalized, but in Argentina you have the government trying to conceal difficult economic adjustments behind a nationalist narrative.”